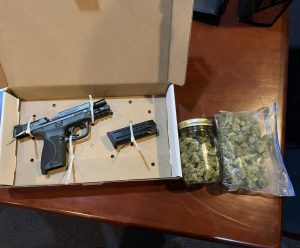 The release states the arrest stemmed from text messages and pictures of a gun and marijuana Wilson mistakenly sent to a deputy of the CCSO.

Deputies reportedly started a text dialogue with Wilson concerning prices for the firearm and the amount of requested marijuana through these texts.

Wilson gave a location in the town of Cheraw where he was working on a house.

Deputies arrived and found him at the specified residence.

Wilson was carrying a bag that contained in excess of 90 grams of marijuana and a pistol. He was arrested without incident and was “dumbfounded by his obvious texting mistake,” the release states.