The Chesterfield County Sheriff’s Office is investigating a shooting with injuries that occurred early this morning on Cleveland Street near Cheraw.

The Cheraw Police Department is investigating a report of shots fired in the Dizzy Gillespie area, but there were no injuries.

The Pageland Police Department has announced an officer was fired after the sheriff’s office charged her with second-degree domestic violence. 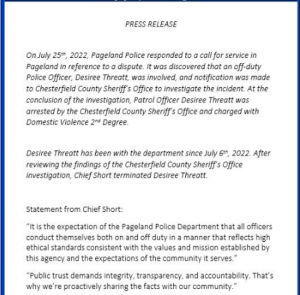